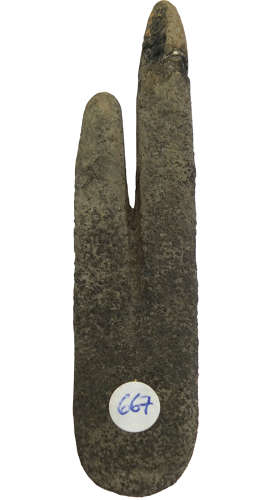 Description: A black stone two fingers funerary amulet, one finger longer than the other and separated by a groove, with fingernails indicated. A fracture below the fingernail on the longest finger repaired and some associated chips and the surface weathered and roughened.

Provenance: From the collection of Julian Bird (1959-2014) and acquired from Timeline Auctions Sale of 1 December 2011 as part of Lot 76. Reputedly at one time part of the Foxwell family collection.

William Henry Forman (1794-1869) was a millionaire welsh ironmaster, who bought the eighteenth century Pippbrook House at Dorking in Surrey. A passionate collector, he added a museum to the rear of the house to display his collection of antiquities. The house served as Dorking’s public library until it closed in 2012.

The Reverend William MacGregor (1848-1937) was born into a wealthy family and was vicar of Tamworth, Staffordshire, during 1878-87. He was also a leading social reformer financing Tamworth’s first hospital, building churches and was patron of many of the towns institutions. He also built up one of the most remarkable private collections of Egyptian antiquities, which was kept in a purpose built museum at his home at Bolehall Manor, Tamworth. He also sponsored and participated in several excavations in Egypt. His collection was sold over nine days by Sotheby, Wilkinson & Hodge from 26 June to 6 July 1922 and totalled 1800 lots which fetched over £34,000 (equivalent to £1.68 million in 2020).

Notes: The two fingers amulet is always made of dark stone and only occurs in Late Period burials. It was placed near or over the embalming incision, suggesting it may represent the fingers of the embalmer and gave added protection to the pelvic/girdle area.