There was a thriving legal trade in Egyptian antiquities for several centuries up to 1983.  Over 3000 years of Ancient Egyptian civilization produced such an enormous wealth of artefacts, that vast quantities of Egyptian antiquities were provided to museums, collectors, travellers and tourists.

In the 19th and early 20th Century Egypt became a favoured destination for a cultured and aspirational European middle and upper class.  During this time, a large number of dealers, which included local Bedouin tribesman, professional Egyptologists, such as Howard Carter and Ludwig Borchardt, consuls and consular agents stationed in Egypt, professional dealers with showrooms and shops and even the Egyptian Antiquities Service (which sold surplus items), supplied tourists, collectors and museums with genuine artefacts. There were over 100 dealers, with well-stocked shops and officially licenced by the Egyptian government, selling in Alexandria, Cairo and Luxor from 1912-1983. In 1928, there were sixteen prominent antiquity dealers in Cairo alone according to Baedeker. Some of these dealers were still active up to the 1970's. There was even a shop in room XCI at the exit of the Egyptian Museum, where one could buy antiquities whose authenticity was guaranteed by the museum curators. When export licences became mandatory in 1912, customers were given the licences at the time of purchase. The Egyptian government of the time even made a profit on these export licenses. It is this long-standing, open and legal trade in Egyptian artifacts that is the ultimate source of most of the Egyptian antiquities seen on the market today.

Recently, Fredrik Hagen, Associate Professor of Egyptology at the University of Copenhagen and Kim Ryholt, Professor of Egyptology and Director, The Papyrus Carlsberg Collection, University of Copenhagen, Denmark, have published a comprehensive study of the antiquities trade in Egypt during its ‘golden age’ in the late 19th and early 20th Century, detailing the immense volume of the legal trade and export of antiquities to western museums, collectors and homes. This is available through open access here and an informative Youtube video giving a synopsis of the research may be viewed here. 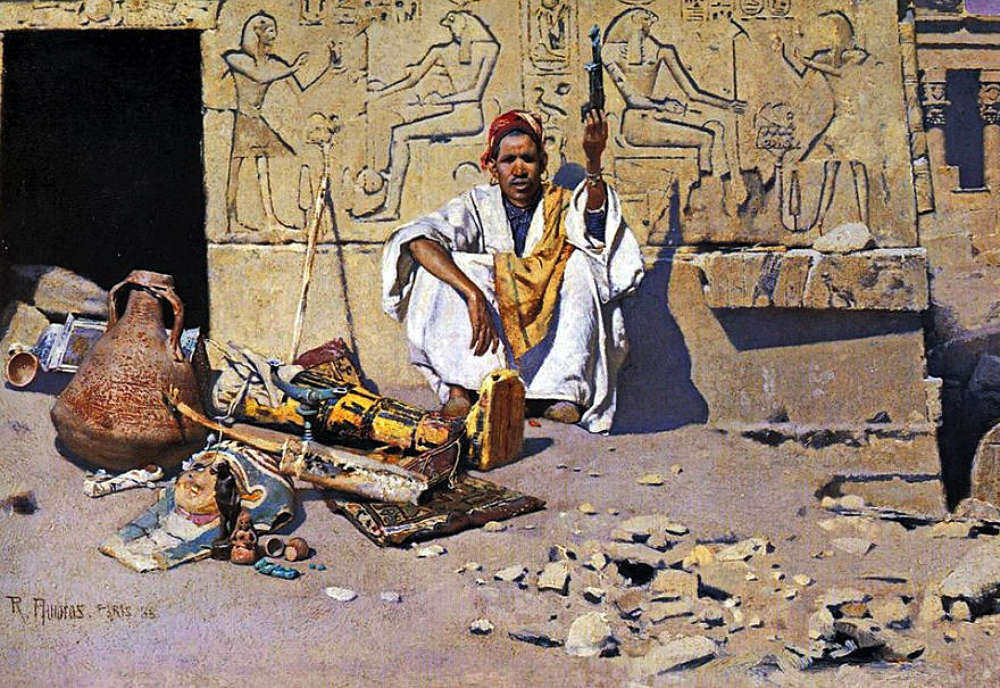 Where do the artefacts seen in dealers inventories come from? Not from modern looting, but ultimately from gentlemen like this fine fellow. 'The Seller of Artefacts' (1885) by Raphael von Ambros (1855-1895). Native traders at ancient sites were ready to supply Victorian tourists with locally found antiquities. 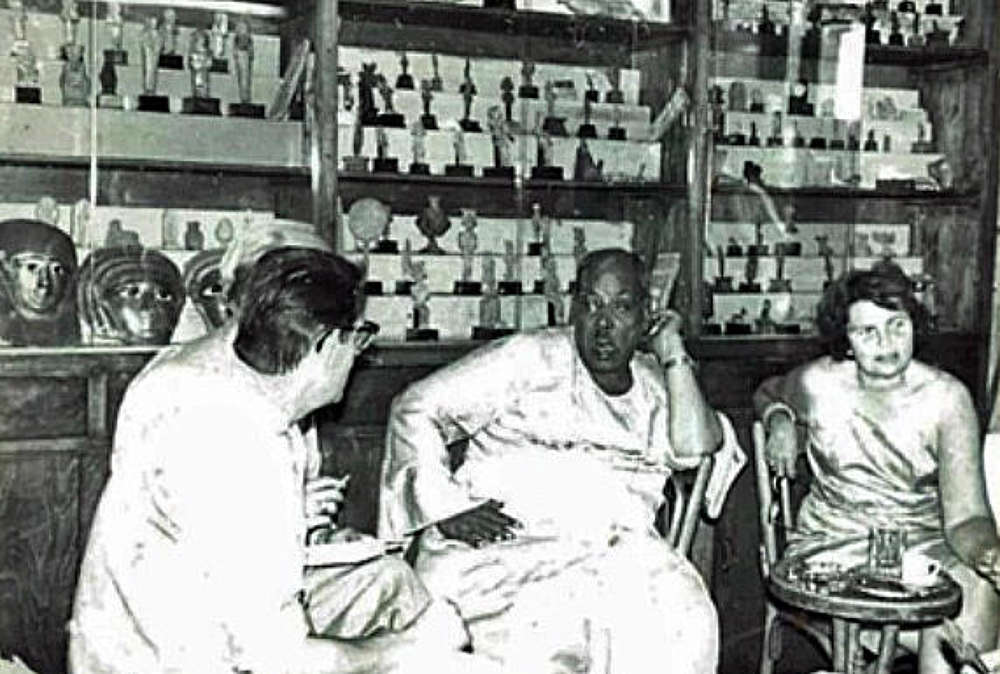 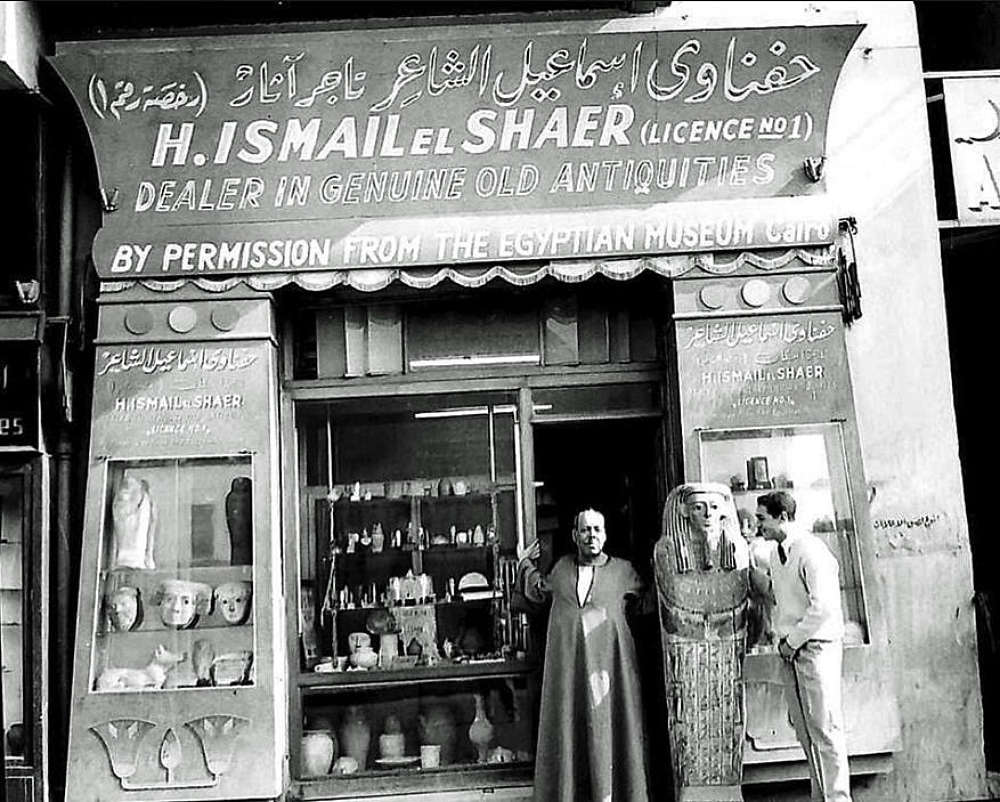 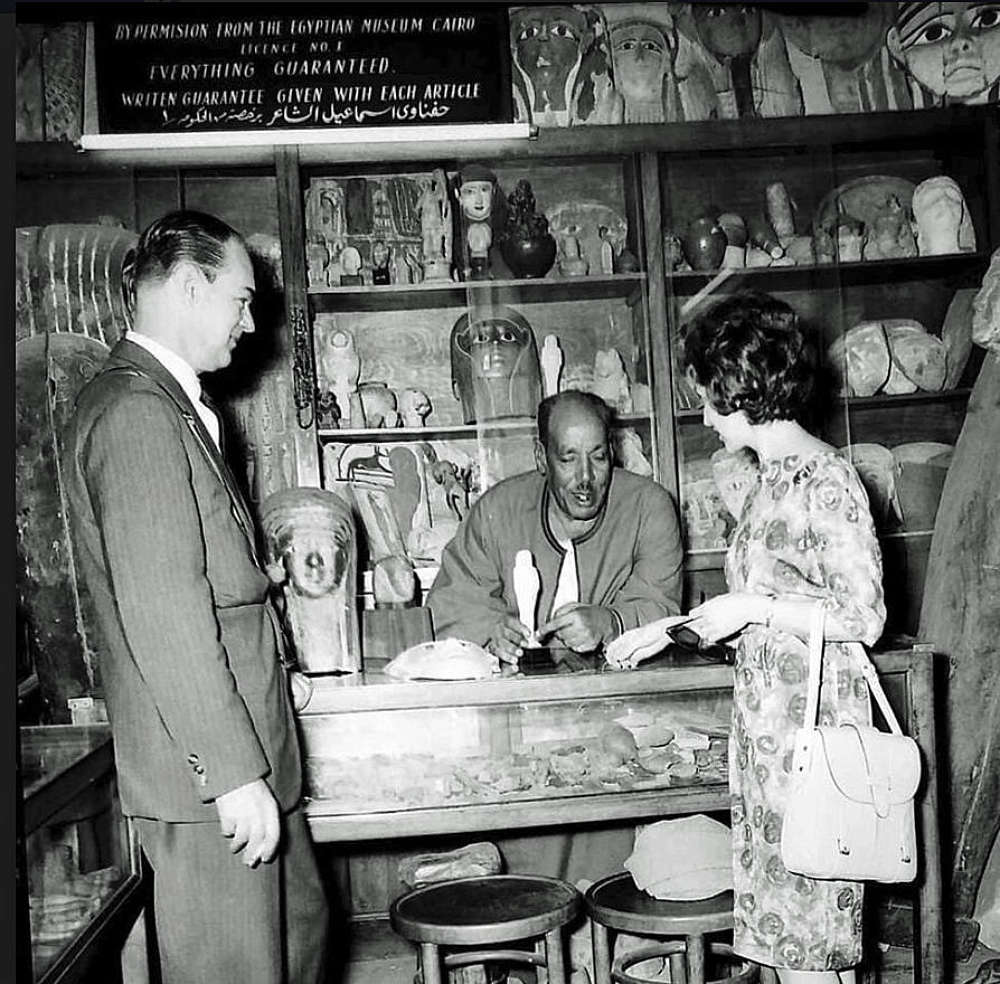 Licenced dealer Hefnawy Ismail el-Shaer inside his shop selling artefacts to western tourists. His stock contained some fakes but many authentic items. Many Egyptian antiquities seen on the market today come from legal tourist purchases from shops like this in Egypt prior to 1984. 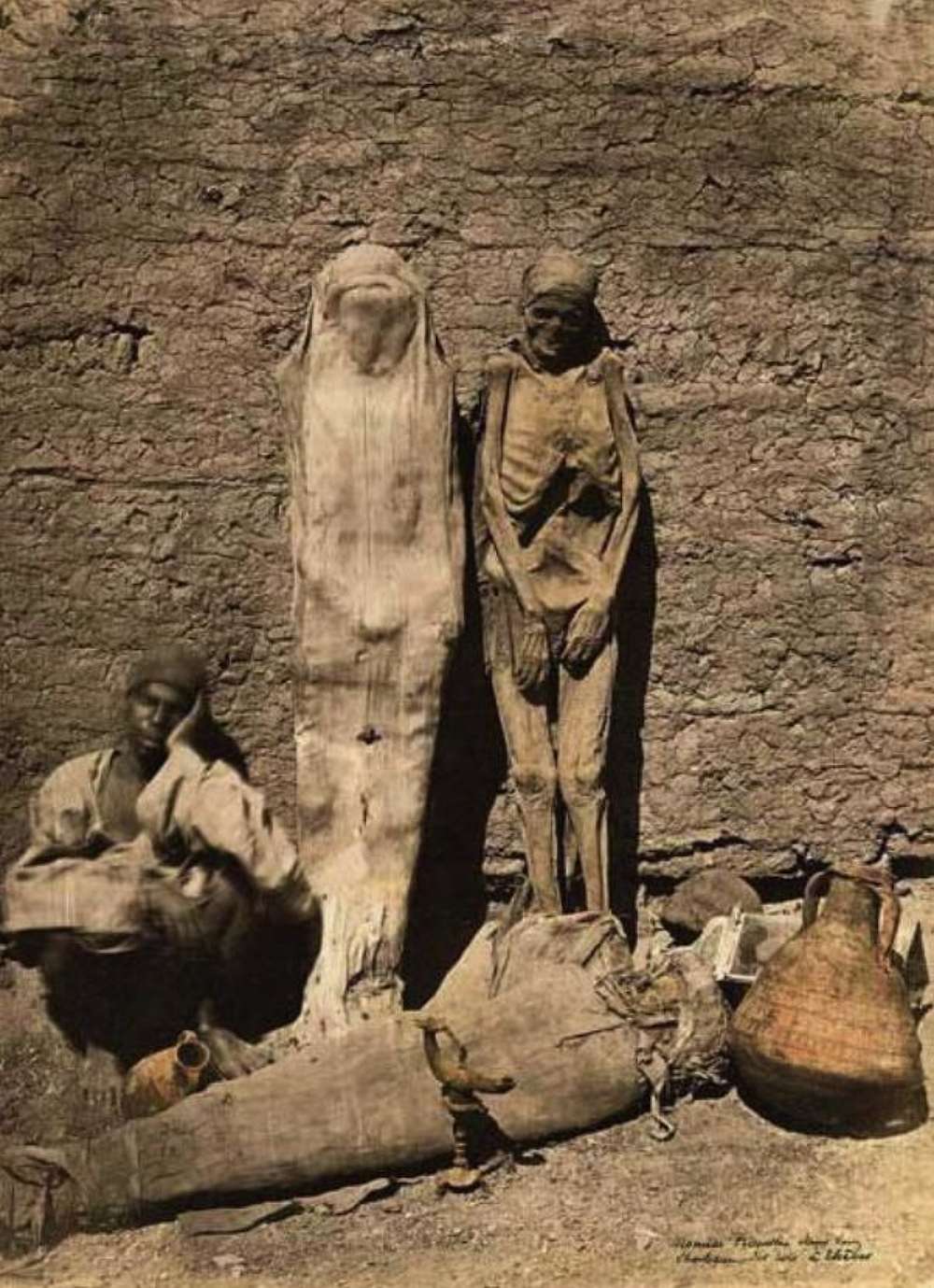 Even mummies could be bought by early travellers to Egypt. Photograph of a mummy dealer by Félix Bonfil (1875) 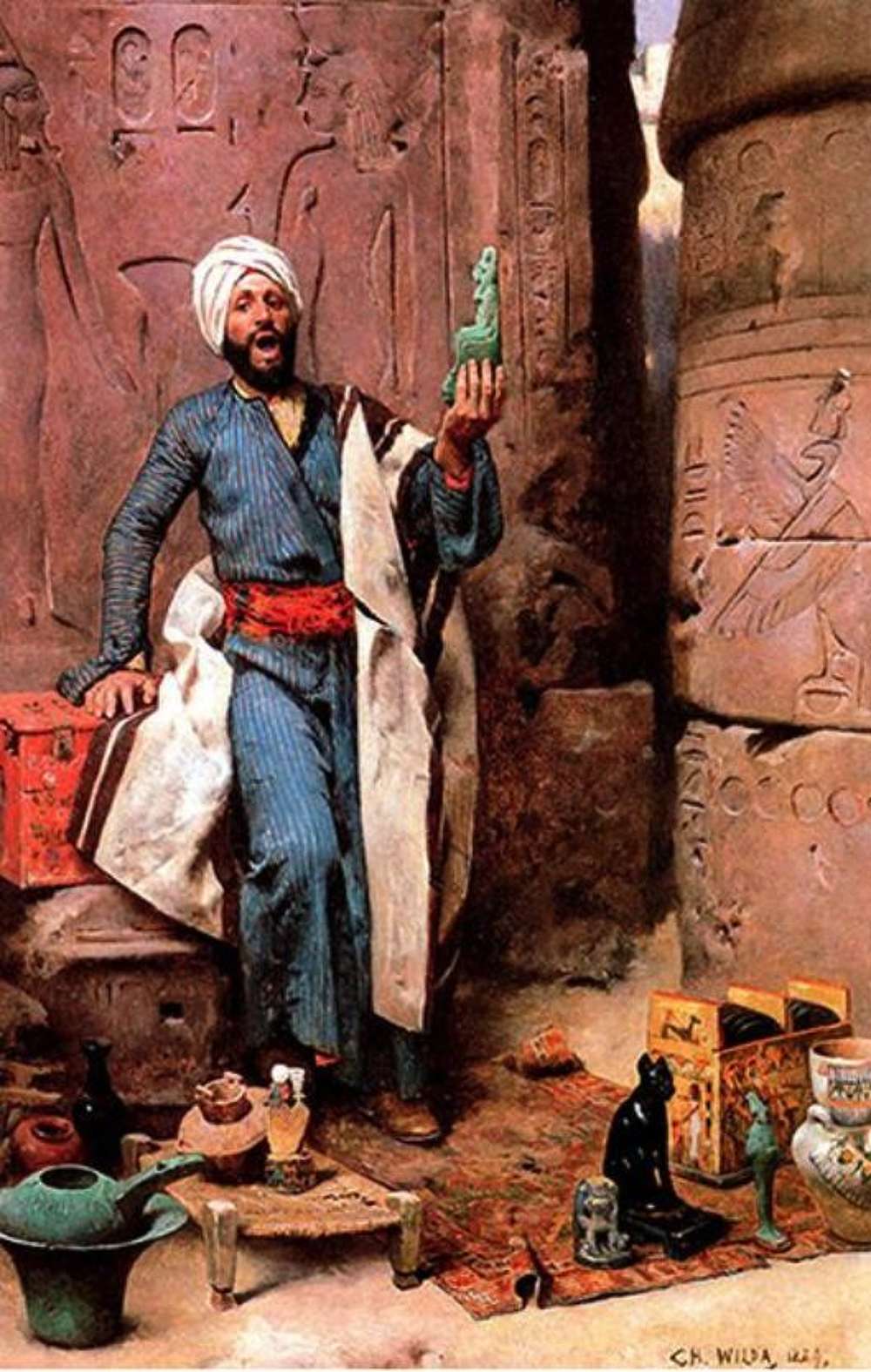