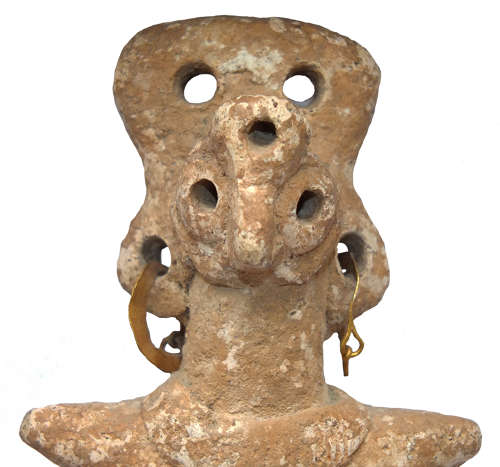 £650.00
Qty
Description: A Syrian bird-headed pale fawn terracotta figure, with medium brown patina, of typical flattened form with pierced headdress, eyes, forehead and ears, with arms out-stretched. The figure wears an applied necklace and has a prominent circular pierced navel, the legs pressed close together, separated by a groove. A simple gold loop ear-ring in each ear (perhaps not contemporary). Overall patchy surface wear but a very nice example of the type, northern Syria.

Background: James Alan Davie was a Scottish painter and musician, renown for his abstract expressionist paintings, which were strongly inspired by Zen philosophies. Examples of his work are held in many national museums and collections worldwide, including the Peggy Guggenheim Museum in Venice, The Museum of Modern Art in New York, the Tate Modern Gallery in London, and the Stedelijk Museum in Amsterdam, amongst others. A striking figure in later life with a thick mane of white hair and flowing beard, he resembled God as depicted in the creation scene on the Sistine Chapel ceiling. He was fascinated by the power of ancient art and borrowed freely in his compositions from cultures that valued the mythic, mysterious and poetic. He was appointed a Commander of the Most Excellent Order of the British Empire (CBE) in 1972 and elected a senior Royal Academician in 2012.

Notes: This terracotta is a typical product of the Orontes Valley and numerous examples have been found at sites such as Hama, Qatna, Qadesh, and also at Tell Mardikh (Ebla). Although neither genitals nor breasts are represented on this particular example, the shape of the hips and the high, pierced headdress suggest that the subject is female.