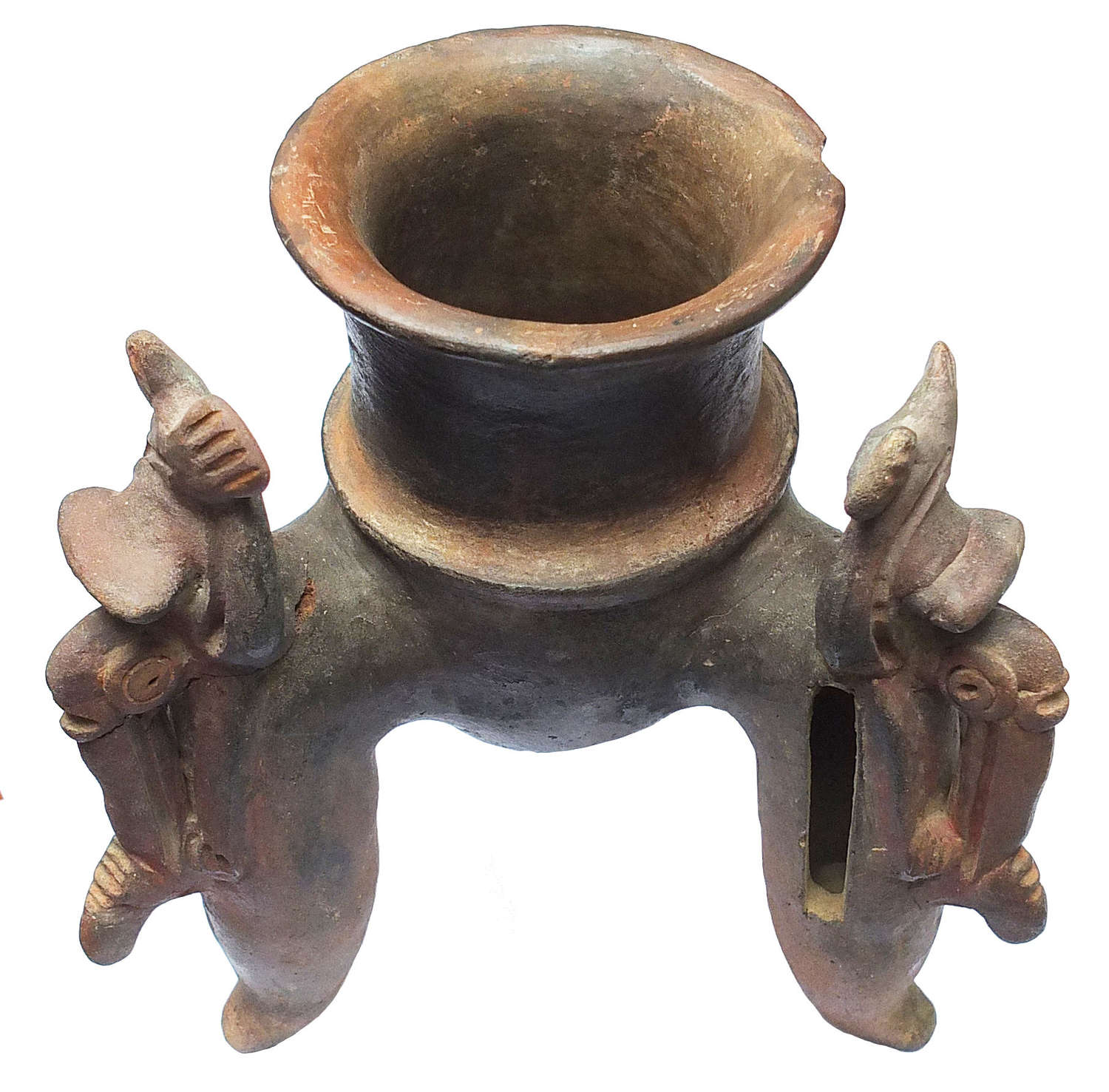 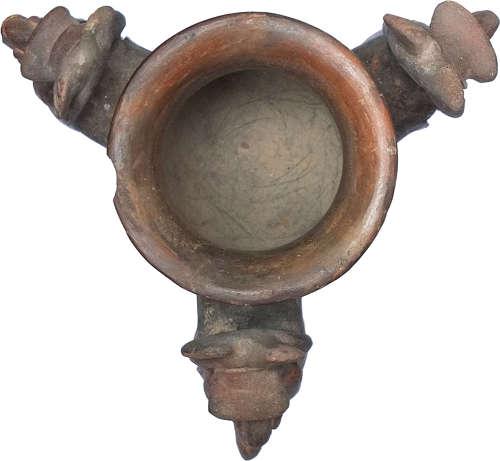 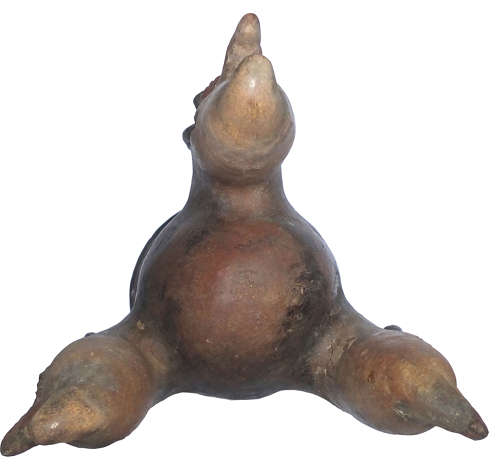 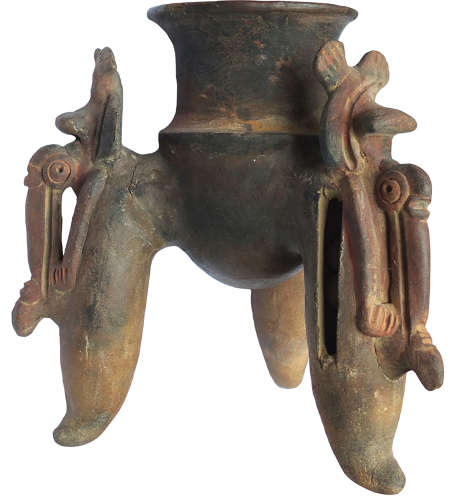 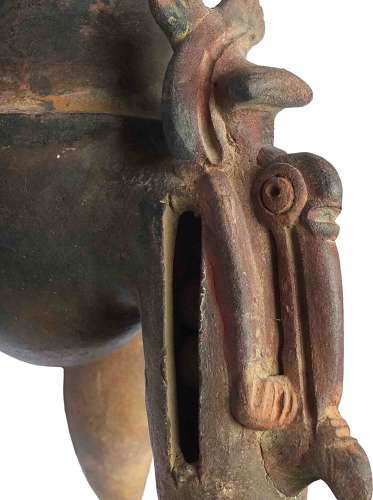 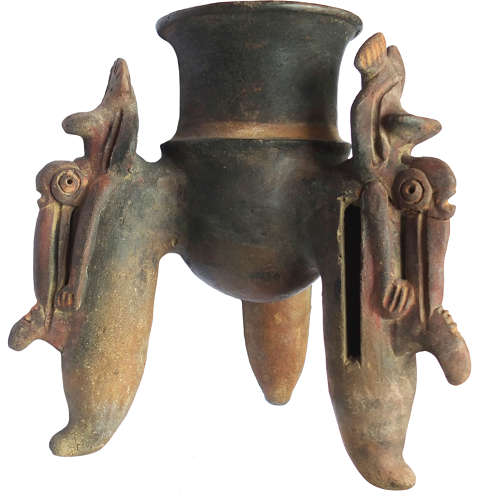 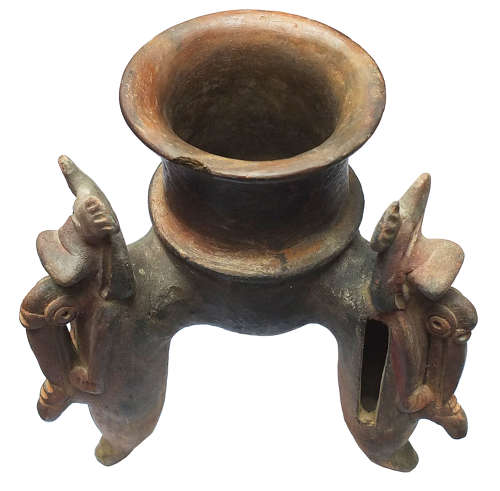 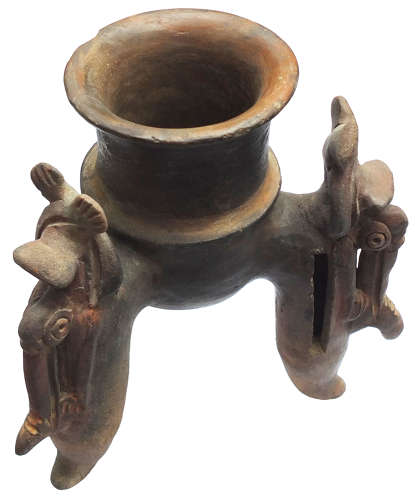 Description: A brown terracotta tripod bowl with dark brown slip and hollow rattle legs modelled as stylised birds, perhaps toucans, facing downwards. The carinated bowl with out-turned lip and a narrow shoulder in the mid-bowl. A small chip to the rim, wear to the slip particularly on the legs and repairs to the legs with some restoration, including re-attachment, but a nice example of the type, from San Rafael in the Talamancan Mountains, Costa Rica.

Background: Desmond Morris is a renown author (best known for his best seller ‘The Naked Ape’ published in 1967), zoologist, surrealist painter and passionate collector, noted for his collection of ancient Cypriote pottery, published as a sumptuous volume by Phaidon in 1985 (‘The Art of Ancient Cyprus’) which although out-of-print remains the best reference available for ancient Cypriote pottery. He first started collecting postage stamps as a small boy and then moved on to fossils and minerals, then seashells, then tribal art, then modern art, then ancient Cypriote art, amassing some 1100 fine Cypriote objects. He then moved on to collect Russian icons and amassed a fine collection of Precolumbian art, then he moved on to Chinese art and finally assembled a collection of Algerian Berber pottery. He bought almost all his pieces at Sotheby’s and Christie’s in London, when there was far more on the market than there is now, although he also bought some objects from dealers in London, New York and Europe. Following the death of his wife, Desmond sold much of his remaining collections (his famed Cypriote art collection had been sold much earlier to finance other collecting interests) and moved to a smaller house in Ireland to live near his family. We were fortunate to acquire a number of his Precolumbian pieces. Desmond always regarded it important to have one’s collection on display around you and not shut away in cupboards. His advice - only buy items that catch your eye and are somehow special. Perfect advice from a true connoisseur.

A rare opportunity to acquire an object from the collection of one of Britains’ most distinguished private collectors.

Notes: Compare a similar example but with variant feet in the Walters Art Museum, Baltimore (accession number 2009.20.210). Such tripod vessels, sometimes known as chocolate pots, are a characteristic pottery type of the Costa Rican Atlantic watershed.  Typically found in funerary contexts of members of the elite, they were used as ritual vessels for products such as chocolate, associated with the passing from life to death.